In my organisation, the network people are very crazy. God knows what tool they use. Because all junk mails escape through their filters 🙂

Worse, the geuine mails sent by friend and family gets quarantined and I get a note saying “This mail body contained objectionable content and was automatically deleted” 🙁

We had raised this at many meetings and no avail. Today my company Chairman sent across a mail to everyone about some new business plans. And that mail got deleted and everyone got a note that the mail contained objectionable attachment. 🙂

I want to meet the networking folks now :-p

One of my friend called me now and asked me if I had attended another friends marriage. I was thinking, how can you attend one’s marriage. Isn’t marriage a relationship? And wedding the ceremony, where the couples get into that relationship officially?

I have heard many people talk about attending marriages, while they are actually referring to attending weddings.

Correct me If I am wrong! 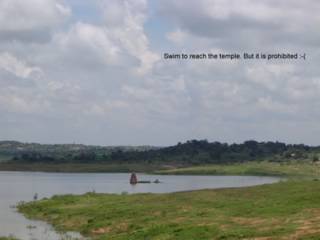 Folks!!!!!This photo blogging really works. And the photo is of a lake @ Tippagondanahalli(35 kms from Bangalore on Magadi Road)

I was just adjusting some settings in Haloscan. I wanted to change the TimeZone. I found that those guys have time zones of GMT+5(Karachi), GMT+6(Colombo). No India :-(((

Harry Potter fans. Great News for you all. Mira Nair has refused to direct the 5th Harry Potter movie. The reason she gives is “I do not like to take up a film which others with a similar creative talent can also make,” Nair explains.

Are you still on your chair or fell off reading it?? Okay to tickle your funny bone read this

Surprise! surprise! Mira Nair is directing a completely innovative, creative movie. Check this for further details. Wow. What a creative person she is!

P.S. Thanks to Maverick for pointing it out to me 🙂

Kickoff 20.25 IST (Surprisingly there seems to be no relay. Got to recheck with the newspaper on sunday)

Last night, I almost banged on to a Pizza Delivery boy. That guy overtook me from left and literally took a 90 degree turn. It took sometime for me and the old uncle who was driving the Maruti 800 to grasp what actually happened.

If ever Valentino Rossi checks out on these guys he will quit racing!

Fun apart, it is very bad on the part of Pizza Management to promise customers that they will get their Pizza’s in 19 minutes or whatsoever time. The road conditions, the traffic jams should all be kept in mind before promising. Just not the distance. The pressure lies squarely with the pizza delivery boys, who are given a scooter to fulfill the promise given by some XYZ. And if a Pizza Boy delays in one delivery, he gets a black mark. Three black marks in a month can lead from pay cut to lay off 🙁

No wonder these guys care a damn for the traffic signals

I think it is highly unfair.

People always crib about government establishments and services. But they really do need a pat on the back when they are doing a good job as well

I am really impressed with this Bangalore Telecom site. There is a section called as directory listing which is an exact replica of telephone directory. Now someone from Chennai, neednt ask me to check out the phone number and address of a bangalore company or person. Does chennai telecom have such a section? Can anyone give me the link please?

And tracking your train option @ Southern Railways is very useful. If my folks are coming from chennai by brindavan, I can plan when to leave from office to receive them. No need of calling up 132 or 133 and listen to recorded information. At present this service is there only in Southern Railway Jurisdiction and is not yet implemented in South Western Railways. Hope it is done fast, with bangalore being the station with maximum passenger traffic!

And PF department is issuing an account no to everyone. In that way, you dont need to wait for ages to transfer your PF account from one company to other when you switch. They had come to my organisation and taken photographs of employees, and gave a temporary card as well 🙂

In case you are interested in knowing the TRAI (Telecom Regulatory Authority Of India) please visit this site . These guys regularly update the site and lots of useful information is available.

And people who are new to bangalore. It takes very long to get a new gas connection these days. Some agencies are not even ready to accept the bookings. So watch out.

Christina Aquilera has come to India. So we all indians are blessed now. Because she has set her foot in our country. To know more click here

“Hello Mr Bucknor. How do you do? I think that was out, dont you feel so? Next time such thing happens you have to declare the batsmen out? Now can we carry on with the game.”

I feel like sharing this. Day before, my friend developed rashes all over at around 12 AM. I took him to Emergency Ward,St John’s Koramangala.

When we entered, the attendant asked us to enter a room. After entering the room we saw some 4 to 5 beds. And in one bed, there was a patient suffering from heart attack. There were some 4 to 5 doctors attending to him at same moment.

The nurse there asked us to wait in next room. After a while the heart attack patient passed away. Then one of the doctor came to our room, and treated my friend very normally as if nothing had happened. He gave my friend some injection and for 30 mins he was asked to lie down. And the other doctors also joined him and made sure nothing seriously wrong with my friend. A dermitologist came and checked him, declared everything is fine and bade us bye.

This incident really shook me apart. Seeing a person die is shocking. But the way the doctor was so cool and composed whilst treating my friend immediately after the death, shook me. Great courage!

In Munnabhai MBBS they say doctors should love their patients. Which I find is good for movie and preaching. But in real life I feel Doctors should be detached whilst they are treating their patient and moving on to next one. Dont you think so?

Did you check out the recent music video’s of Adnan Sami. One song with Amisha Patel, one song with Bhoomika. With due respect to adnan, I think its high time he realises that he is a singer and not a model 🙁

You lose the pleasure of the song, by looking at the picturisation.

For that matter I always had a feeling that Adnan’s songs are worst picturised. Do you remember the picturisation of the song “Kabhi to nazar milao?” Amazing song, but you end up seeing the terrific chemistry between Aditi and Salil Ankola( Remember, the famous 12th man and drinks boy of Indian Cricket). When Aditi has to show expressions, Salil expresses it and When he has to express, she expresses 🙁

A girl will be wearing a micro mini shorts and some skimpy top, and be singing ‘Chod do Anchal’. Where is ‘Anchal’ in the first place?

In that ‘gungta’ song the lady will be having an hair style of an octopus. Where is the Gungta?

Forgive me for trying to see logic! But atleast basic things can be maintained

On the same note, something Kamalhassan said during his interview was interesting. He says there should be no songs in Tamil movies. Instead there should be lots of Music Videos and he would also like to contribute to the same. How nice it would be?